• “Sir Patrick Spens” set to a picture of the housing album cover. Thanks to Buffy Sainte-Marie – Topic.

From her third album “Little Wheel Spin And Spin”, released in 1966 (read my full album review @ The Jukebox Rebel).

8 Buffy originals and 4 traditionals make up her third LP, now with added electric guitar by Bruce Langhorne and string arrangements by Felix Pappalardi.

She digs way back through time and demonstrates an aptitude for the auld folk form with her traditional picks; already followers are seeing great versatility within the artist.

The ominous “Sir Patrick Spens”, an 18th century traditional, tells the tale of a Scots king who acquires the services of the finest sailor in the land, Sir Patrick Spens, to navigate a difficult winter’s voyage to Norway. There, he must fetch the King’s daughter and bring her home to Scotland.

The king sits in Dumferlin toune,
Drinking the bluded wine,
“O where will I get a good Scotch sailor,
To sail this ship o’ mine?”

Then up and spak an eldern knicht,
Wha’s e’r at the kings richt knee,
“Sir Patrick Spence is the best sailor,
Who sails on the salt sea.”

Although folklorist Francis Child does not regard the ballad as historically true – there is no verified character Sir Patrick Spens – Margaret, daughter of Alexander the Third of Scotland was married in 1281 to Eric, King of Norway. She was taken by ship to Norway in the August of that year with a large escort of Noblemen, many of whom were drowned on the voyage home. Dunfermline was, of course, the capital of Scotland at this time.

Whilst it may not be strictly factual, it’s a good story all the same, and Russ Savukus’s droning bass, Buffy’s wavering mouthbow and her trembling auld-Scots-style vocal cast dark overtones from the beginning; our worst fears are realised when we discover that the sailors are doomed to lie at the bottom of the ocean in a shipwreck. The end verse wid bring tears tae glass een:

And lang-o-lang may the ladies sit,
With their gold combs all in their hair,
A-waitin’ for their good Scotch sailors,
Who n’er will come no mair

Buffy Sainte-Marie is touring constantly, and coming off her critically acclaimed, award-winning 2015 album Power in the Blood, nobody could ever accuse the Academy Award-winning songwriter of taking it easy. Since her groundbreaking debut, 1964’s It’s My Way!, the Cree singer-songwriter has been a trailblazer and a tireless advocate, an innovative artist, and a disruptor of the status quo.

Sainte-Marie has spent her whole life creating, and her artistry, humanitarian efforts, and Indigenous leadership have made her a unique force in the music industry. In 1969, she made one of the world’s first electronic vocal albums; in 1982 she became the only Indigenous person to win an Oscar; she spent five years on Sesame Street where she became the first woman to breastfeed on national television. She’s been blacklisted and silenced. She’s written pop standards sung and recorded by the likes of Janis Joplin, Elvis Presley, Donovan, Joe Cocker and Jennifer Warnes. She penned “Universal Soldier,” the definitive anti-war anthem of the 20th century. She is an icon who keeps one foot firmly planted on both sides of the North American border, in the unsurrendered territories that comprise Canada and the USA. 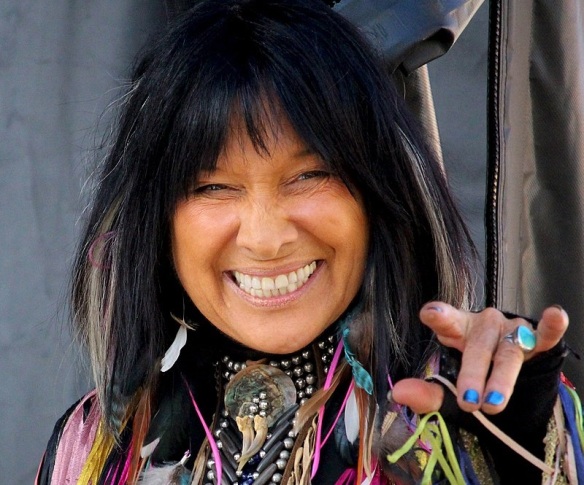